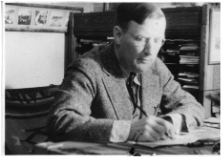 Oscar Huber
Oscar Huber was town & mine superintendent from 1919-1947 for the Albuquerque & Cerrillos Coal Company. In his tenure, he inspired community and formed the Madrid Miners ball team, hosting minor league teams from the Southwest. The Madrid Ballpark was built in 1920 by the Madrid Employees Club.